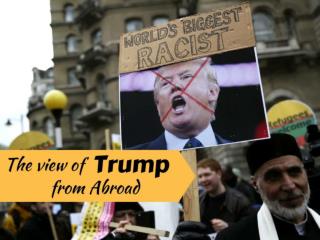 People around the world share their views on Republican candidate Donald Trump. A Kiwi Abroad – a view back from the international community - . annette dixon director, regional operations europe and

The U.S. election from abroad - From burning effigies in britain to burgers in japan a look at how the world sees the

The View From Saturday - . essential questions: how does using the strategy monitor/clarify help you to become a better

The View from Indonesia - . faith, compassion and acceptance: addressing homophobia and hiv-related stigma through

The View From Washington - . frank kelly managing director head of government affairs – americas. everything you wanted

“The View From Space” - . understanding the methods and context of a new major paper in the cancer screening